My dream job is to own a small record store with rotating beer taps, so when I say to my wife each morning, “Hey honey, I’m headed to work!”, what I really mean is, I’m going to listen to records, drink a few heady beers, and talk music and beer with music and beer lovers all day.

That dream seemed out of reach, and almost foolish, until I learned about Hunky Dory in Durham, North Carolina—a small record store with rotating beer taps where music and beer lovers talk music and beer all day. For a lesser man, this would have been soul crushing. Someone else with the same brilliant idea beat me to market! Thankfully, there’s enough room in this world for more than one hybrid craft beer bar/record store. 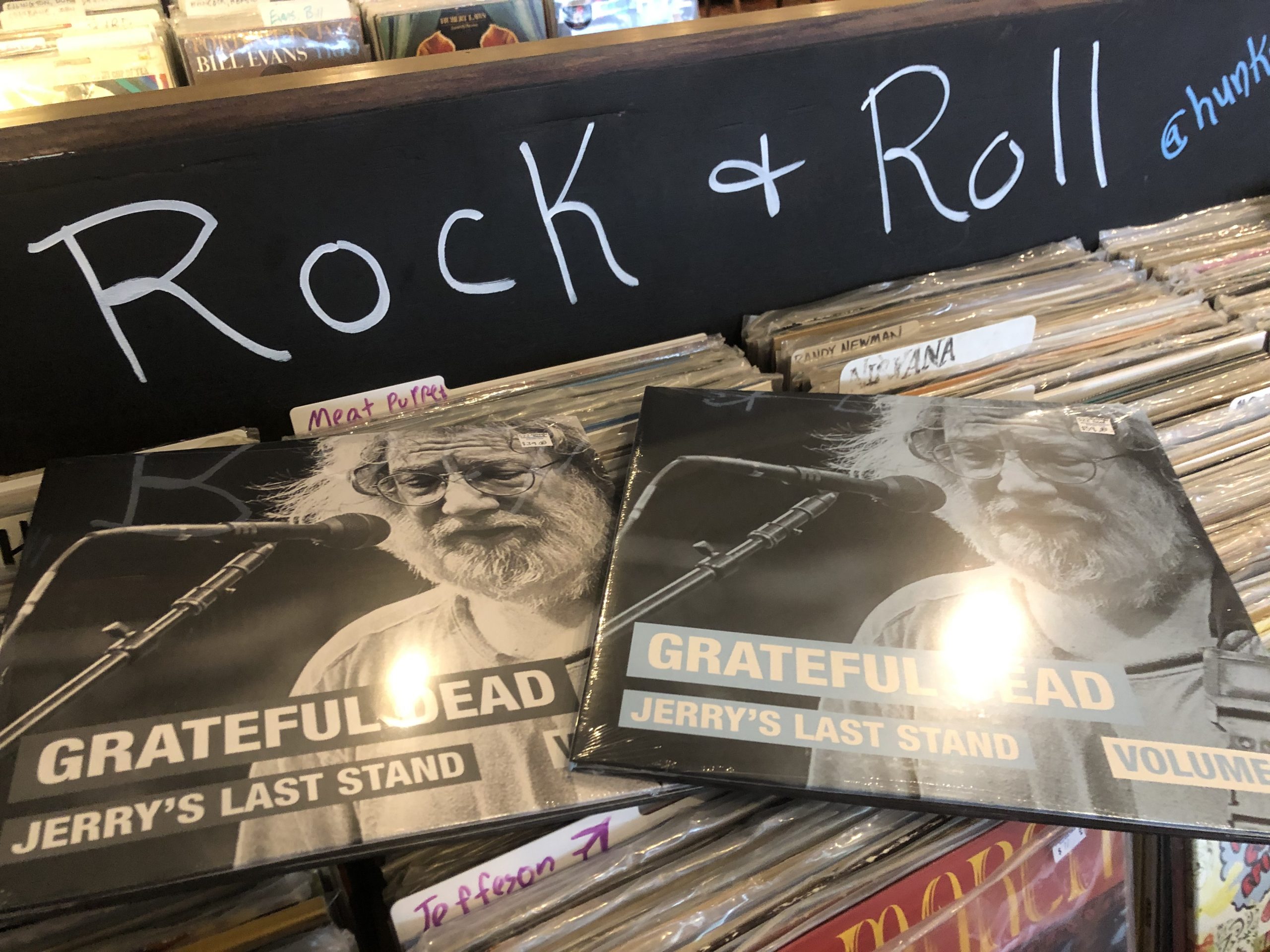 I visited Hunky Dory’s original location for the first time in June, which was fitting since June was recently coined independent record store month thanks to Discogs.

Hunky Dory’s setting is quaint and compelling—very chic bohemian. Handmade record bins line the left wall with alphabetized and categorized vinyl, including new bootlegs like Jerry’s Last Stand, Volume 1 and 2, which are now logged in the complete list of Grateful Dead Bootlegs – The 2000s. To the immediate right, when you walk in, is a lounge area with couches and tapestries reminiscent of the good ole’ college days where time was sticky and slow. Gigantic posters of the Grateful Dead and Radiohead, hang from opposing walls, almost dueling for supremacy in the hearts and minds of patrons passing through.

Nestled inside is a small bar with 10 rotating beer taps, largely represented by local North Carolina breweries, like Burial Beer Co., with a few out-of-state gems, such as Prairie Artisan Ales. The concept is simple—grab a beer, listen to the vinyl that’s spinning, and shop for records—que the “mind exploding” gif.

After meeting a friend and colleague for a few beers and record perusing, I introduced myself to James, the guy managing the register, pouring beers, and spinning records that day—in other words, he was the guy that was “working”. I asked James if he’d be cool with me asking him a few questions and writing a piece on Hunky Dory. He responded with warmth and openness, and here’s how our conversation went:

I’m curious how beer and vinyl can compliment each other. Why do you think this concept works?

Beer and music generally compliment each other, and with vinyl, if you want to do it right, you need to spend some time in here digging and looking, so you can see everything, and the best way to do that is with a beer in your hand.

Have you ever had any issues with people trying to flip through stacks of vinyl with a beer in their hand? Some people probably need two hands to get it done.

This one day, somebody spilled a whole beer on bunch of records, and unfortunately, they had to pay for them all. Generally, it depends on the situation and how much beer is spilled and how much damage is done. When stuff like that happens, we try to work something out, but that was the first time in a year and a half of me working here where a spill that extreme happened. Typically it’s just a few drops and no big deal.

When you’re working here and thinking about what album to spin next, do you give thought to what beers you have on tap and if they pair well with the music you’re spinning?

Yeah, I guess we think about that a bit. There’s a beer here now, called Still Spinnin’. It’s record focused, so that’s a good example. We also try to get beers on tap that are associated with music and records.

How did you get a job here? What’s your story?

I moved here during the pandemic because I needed a job. I’m from Greensboro, and I worked at a record store there.

Is Hunky Dory a completely different vibe from where you used to work?

Yeah definitely! The other place didn’t serve beer, but I worked at a bar too, so I did actually work at a bar and a record store which I guess led me here.

Since most independent record stores don’t offer their customers other stuff like beer, do you think the future of record stores is pairing the two, which probably helps big time financially?

Yeah, I mean I’d say so. Like anything, there’s slow seasons and tough times. People are always looking for beer too, so we might as well provide it to them.

Do people just come in here to drink, or are most shopping for records too?

I’d say it’s 50/50. We have regulars that come in and just drink 1 or 2 beers at the bar, and they’ll buy a record if it’s something they’ve wanted and waited awhile for, but they rarely dig through bins and search for new stuff.

I’m also curious if you know about any other places like this around? The first Hunky Dory I visited was in your other, newer location in Raleigh, which came as a recommendation from my sister-in-law. She was stoked about getting a new record player for Christmas, so we went there together and had a really great time with her dad and my wife.

I know Schoolkids Records and Raleigh serves beer, but I think they only have 4 beers on tap. I also think some people have started to get into it a bit, but I think this spot has the most with 10 beer taps. Sometimes you’ll see 2 or maybe 1 tap, but it’s kind of just there for convenience if you want it. It’s not woven into the business concept.

After our conversation, I thanked James and encouraged him to keep up the good work. He was gracious and sold me the record he’d been spinning while we talked, which was Skintight by Skin Alley, a nice mix of rock, soul and funk. I had a Burial IPA that paired perfectly with it.