Blast Off into Orbit with Someone

Artists are finding new ways to defy traditional media. Beer bottle labels can now be peeled off and played on your record player. Album covers and inserts come to life through apps on your cell phone. My favorite example of getting creative in this space is from the relatively new indie artist, Someone, who’s the moniker for Dutch multi-disciplinary artist Tessa Rose Jackson. She combines cosmic abstract art and psychedelic pop music that springs to life in augmented reality by using the free “Someone presents: ORBIT” app.

Curious how it works? Watch Someone explain.

Someone’s first LP, Orbit II was a limited, low run release on the first Record Store Day 2020 drop on August 29th. The album builds off her truly exceptional EP titled, Orbit released in 2019. The only disappointing thing about the Orbit EP is that it never hit the hydraulic, nickel stamper press and made it to vinyl, but now all is right with the universe since Orbit II will be melted into a groovy circle. Someone takes elements of pop and mashes them up with psychedelic auditory exploration. If micro-dosing had a soundtrack, it would be Orbit II. The future of art, music, art-music and Someone are as bright as quasars.

In the spirit of blasting off with Someone and exploring new dimensions, I suggest you pair Orbit II with North Coast Brewing’s Old Rasputin Russian Imperial Stout, which is collectively known as one of the best imperial stouts out there. Direct from the brewer, “Produced in the tradition of 18th Century English brewers who supplied the court of Russia’s Catherine the Great, Old Rasputin seems to develop a cult following wherever it goes. It’s a rich, intense brew with big complex flavors and a warming finish.” Old Rasputin pours as black as outer space, has a rich dark chocolate and espresso aroma and an incredibly smooth and creamy finish. It coats those hard to floss spots between your teeth and leaves your body feeling all warm and fuzzy. Drink a few and you might even feel disoriented. Orbit II can help with that too.

Here is a photo of the beer paired with Orbit II 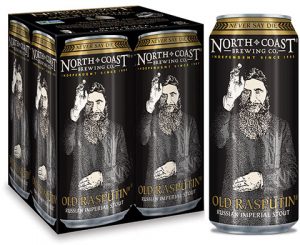